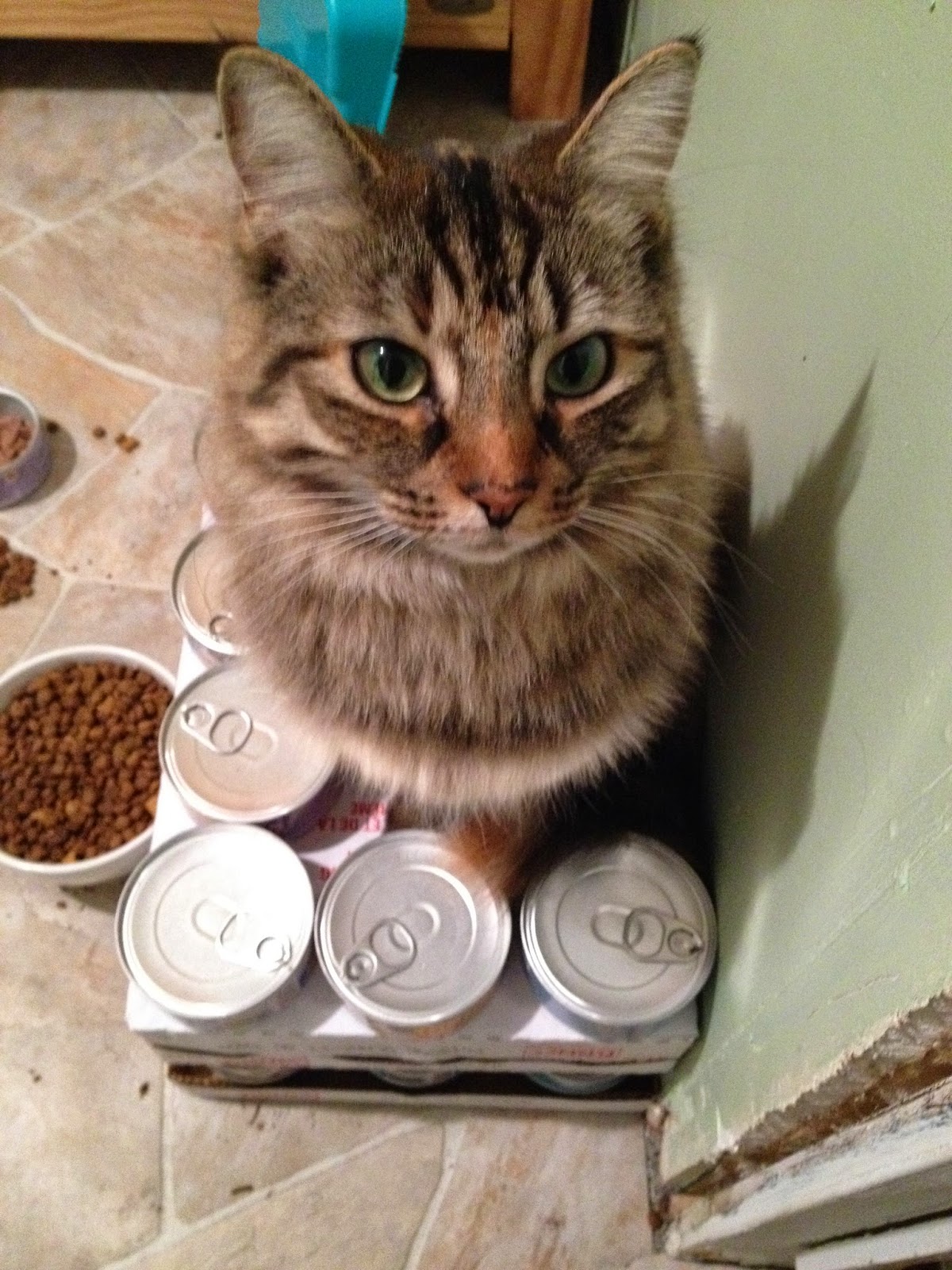 I didn't just sit here because the colour of the walls does a nice job of bringing out the gorgeous green of my eyes.  Rather, I was trying to send a message to my humans, who seem to be constantly passing right by the cat restaurant without so much as serving a single meal.  Alright, I suppose the bowl of kibble counts as a single meal, but one doesn't even need opposable thumbs for that.  (I have managed to chew a rather nice sized hole in the kibble bag, large enough for my whole upper body, which negates the need for opposable thumbs in the endeavor of attaining kibble).  Cans are a different story.

Right now I am sitting on and amid thirty-two choice meals, and there isn't a single human getting the hint.  I don't worry, fret, or even get frustrated...I get even.  I will sit here prettily and bide my time until one of the humans comes in.  Hopefully at this point, they'll get the hint and open a can.  If they at least pet me, (and who wouldn't, I mean look how cute and appealing I am), then I will let them off the proverbial hook.  However, if they seem to be breezing in and out of the room as they are wot to do, I will nonchalantly kick over a can.

I have found that the practice of dispersing my cans will generally have one of two effects.  The first, is that one of the mini humans might be the next to enter, and the little things might trip on the can left deliberately in the middle of the doorway.  This is the worst case scenario, because then the large human will come running, and won't be focusing on feeding me at all.  Also, the little humans let out this annoying screechy sound and leak at the eyes.  I hate wet, I hate that sound, and there's no food involved for my troubles.  Enough said.

The other possible outcome is that I can aim the falling of the can so that it hits precisely on the tipping point of the edge of the bowl.  If done correctly, (and I have honed this skill), the bowl of kibble will tip with the weight of the can, spilling the dry food across the floor.  The humans will rush in for one reason or another, and will come across the shall we say, art.  Humans, I have learned, detest having things stick to the bottoms of their feet.  I believe this is likely linked to the disability of having no hair growing between their toes.  We cats are used to having things stick to our fur, and so unless it's wet, we don't mind.  (In fact, most of us have learned how to grind kitty litter in there well enough to be able to track it around the house)!  But I digress.  Upon seeing the "art", (or walking across it on their rushed way to the porcelain bowl), there will be new vocabulary I only hear during rare and loud occasions, which will be paired with restoring the bowl of kibble.  Lastly, they must pick up the can of food to place it back on the box and bam, often this means suppertime!

So now I set my trap and wait.  Hopefully a human will come in soon and pet me at the least.  Until then, I will call to them. Here, human, human...feed me!