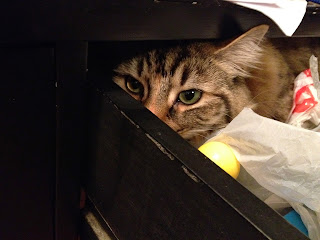 Boxes are wonderful nondescript hiding places, but drawers work well too.  The trick to really hiding from, or scaring the bejeezus out of a human, is to hid while they're not looking. This can require a good deal of observing your humans to become familiar with their habits when opening and closing drawers.  After all, you don't want to ruffle your fur or get a paw or tail caught due to their clumsiness or nonobservance. Therefore, learn the signs that your humans exhibit before taking a chance at an opened drawer.  Things to look for:

These things can all be cues to how much of a rush your human is in.  If their gait and speed are rushed, they are likely what they call LATE, (Laziness Attributing to Tardy Endeavors), and if their voices are raised, and possibly accompanied by cursing, my advice is to just avoid them completely. To approach a human in this state will produce fruitless yields. In this harried frame of mind, they're not going to stop to feed you, (trust me, I've tried). If you choose that time to stroll gracefully across their path, you can be sure there will be no petting, and worse, they may trip, and though you'll be secretly laughing inside, it might land you outside on a drizzly rainy day.

Instead, watch for when your humans are stuck in one spot doing something they don't enjoy but are required to do, like laundry.  This usually happens in the middle of one of those days that the humans are house-bound, so you might as well take advantage of their logy dispositions. I have found that since the coming of the mini-humans, now the large ones will leave the room to stuff the miniature naked body coverings into spaces in the mini-humans' room. If perchance the large human quits the bedroom you are in with an awkward armload, look to see if they have left you an opened drawer.  A good system is to sprawl out on the top of the dresser so you can act fast the second they leave. Then you can quickly drop down into the drawer and slither in against the back of it so that the socks or shirts can partially obscure you. Now you are camouflaged well and can plan your next step, be it sleeping, or waiting until the human returns and reaches in an unsuspecting hand with another pair of folded socks.

If you're lucky, and let's be honest, as long as there are mini-humans in the house, there is a good possibility of the following happening; one of the little hairless things will spill or break something, leaving you a good chunk of undisturbed time to have a well deserved nap. The other wonderful side to this is that when they attempt to wear the body coverings at a later time, you will successfully have left your mark on them. After a good long nap, during which time they are forced to leave their folding, I kindly remind them that they can take another quick break as I stretch and meow...feed me.