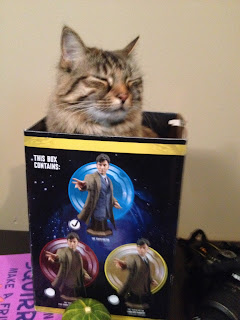 Some boxes seem bigger on the inside. The nice thing about being a cat is our flexibility. Now, I'm not just talking about the flexibility one must possess when living with the large furless humans, but that is definetly a must! Humans, probably because of their size, sometimes seem to think that they run the show, but we know better, don't we. (Just think about all of the times we stretch out on their activities, and as a reward, they pet us and coo at us, and make us feel loved. Speaking of which, I think I see some laundry that needs folding and is decidedly too hairless...

Now I'm back, where was I? Ah yes, a cat's wonderful flexibility. Besides being able to do yoga while having a bath, and being able to fit into tight spaces that we can then attack the humans from, cats are incredibly resillient in the face of the whims of the large hairless beasts with which we live.  Humans often seem to operate on a schedule of sorts, which dictates when then (and unfortunately when we,) should eat. When a cat is hungry, we feed. End of story. Therefore, it can be very frustrating to have to wait until the humans are ready to open a can, or drop down a few treats throughout the day. Yes, I know a lot of us have kibble constantly at our desposal, but really, if a human isn't serving us directly, I consider it more of a self-scavanged snack, rather than a meal.

Then there is the perceived language barrier. (I say perceived because we can fully understand most of the gutteral sounds humans throw at us, but if we jumped when they grunted "jump", we might not get away with half of our most enjoyed pass-times).  I could be laying on a sewing project, or laundry, or a book the little ones are trying to read, or a paper the humans are trying to write on, and I actually have to wait till after a series of gutteral squacks and grunts from the hairless ones are uttered, to be petted! I don't care what you're saying, just pet me! If I wanted to have a conversation with you, I would talk to you the way the rest of the animal kingdom does, through body language. So come on big hairless ones, talk with your hands, on my back, and under my chin, and on the back of my neck...purr. Oh, and by the way, when a cat purrs, he or she is not saying "I love you", we are saying "don't stop", and you should listen.

So with these things in mind, the next time you are frustrated that you must wait for your feline to move from something you misguidedly feel is important, remember how long we've been waiting for you, each and every day. Take it to heart, give me a pat, listen when I purr, grab a can...feed me.