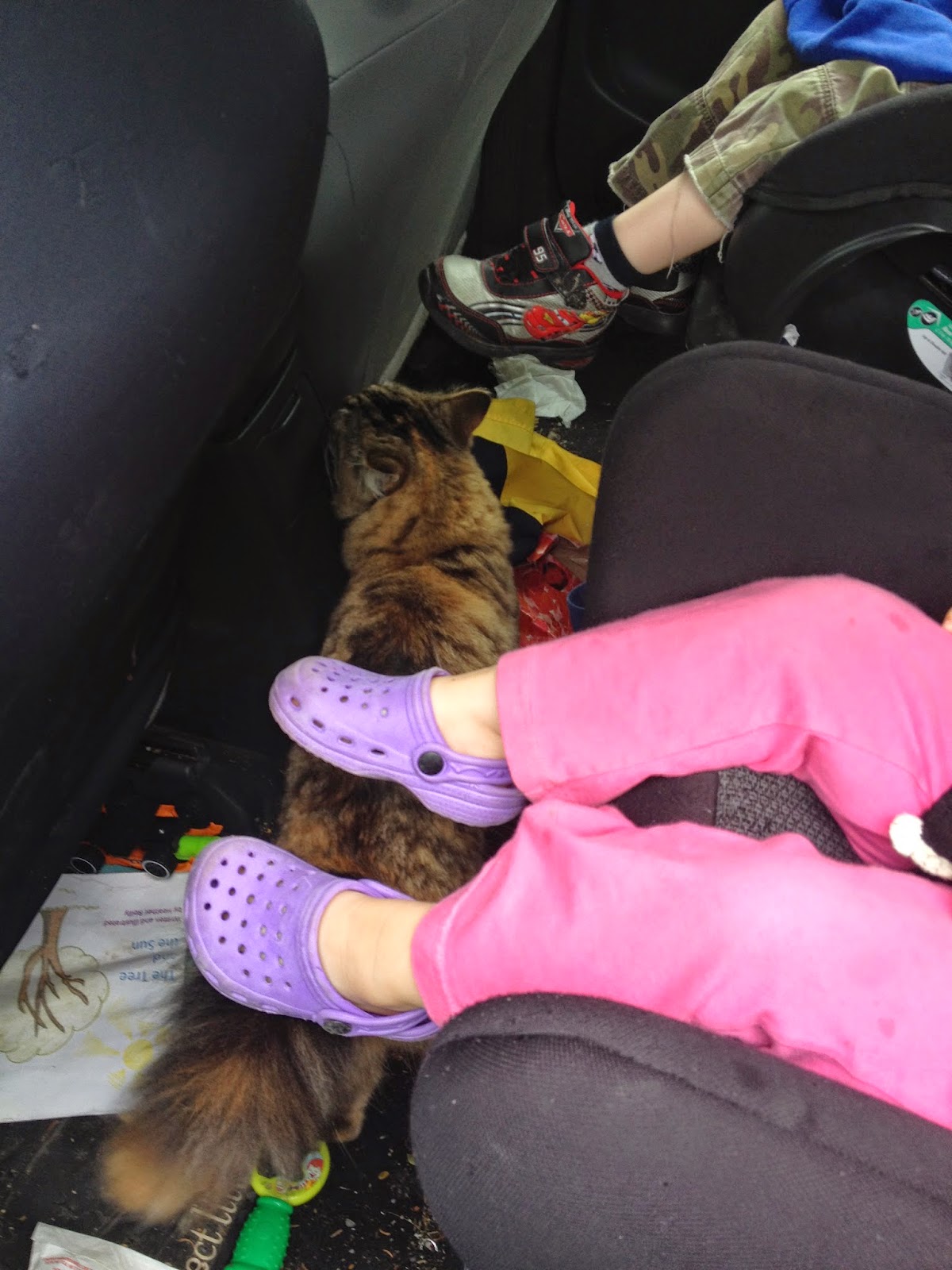 Well, it is clear that I am going to have to put my paws down!  As you know, the bi-pedal humans are incredibly slow.  Someone with my refined speed and agility can only call their gate...lumbering at best. (I'm being polite, you understand).  In any case, to make up for it, they have invented this sort of human-carrier on wheels that has moving seats and that goes very fast. I believe they call it a Carrier And Recliner, or CAR.

But that is not important.  What is important, is the way my humans all piled into it without even cracking open a can for me first! I mean I know it wasn't my supper time yet, and it's true that I have trained them to always have a bowl of kibble on the go in case I want a snack, but what if they got home after six o'clock!  Why, I have standards, and supper time denotes soft, meaty, odorous, jelly-like food from a can.  (I'm beginning to salivate just thinking about it!) I would be truly forlorn if I was left sitting alone, meowing at the top of my lungs beside the bowl of kibble, with an empty space beside it where my can should have been.

When my humans are around, the mini human that tries to feed me closed cans all day, finally wears the patience from the larger variety at almost six pm exactly, and that is how I get fed.  When I saw my mini humans locked into their CAR seats, I knew my supper was in jeopardy.  I jumped in quickly and looked up at them as if to say "Aren't you forgetting something?"  Of course, my humans aren't necessarily the brightest, and they misunderstood.  Instead of going back into the house to feed me properly, the large human dragged me out from under the feet of the mini humans in a most unceremonious manner.  True, it probably would have gone smoother if I hadn't grabbed ahold of the floor mats with my beautifully sharpened claws, however, I had a point to make.  I ended up being stroked, and told that I wasn't allowed to go along too before I was once again released into my natural habitat, but I wasn't done yet!  Cats don't give in easily, it's not in our nature.  Anyone who has ever heard the cat-calling the humans have dubbed a kind of music called "caterwauling" during a heat, knows of our persistence.  But again, I digress.

Not wanting to be outdone by my human, I sat prettily and immovably behind the CAR, so my human could not move it.  (I have great faith in my humans, what they lack in brains, they make up for in heart, and I knew I was safe in their hands.  They love me.  Who wouldn't?)  Unfortunately, this plan also backfired, and I was moved again, this time with a sore lack of petting, into the human's shelter.  After watching the CAR take my humans away, I strolled nonchalantly into the feeding area to discover what I had already suspected.  Kibble.  No can.  Well, no opened can.  I love my mini human, even if she hasn't realized yet that she has opposable thumbs.  I stared hungrily at the tower of would-be supper beside my kibble bowl, and started to wonder when they would be back.  Perhaps I'll take a long nap in the sunlight, and think for next time, of a new way to tell them...feed me.
Posted by Unknown at 11:24