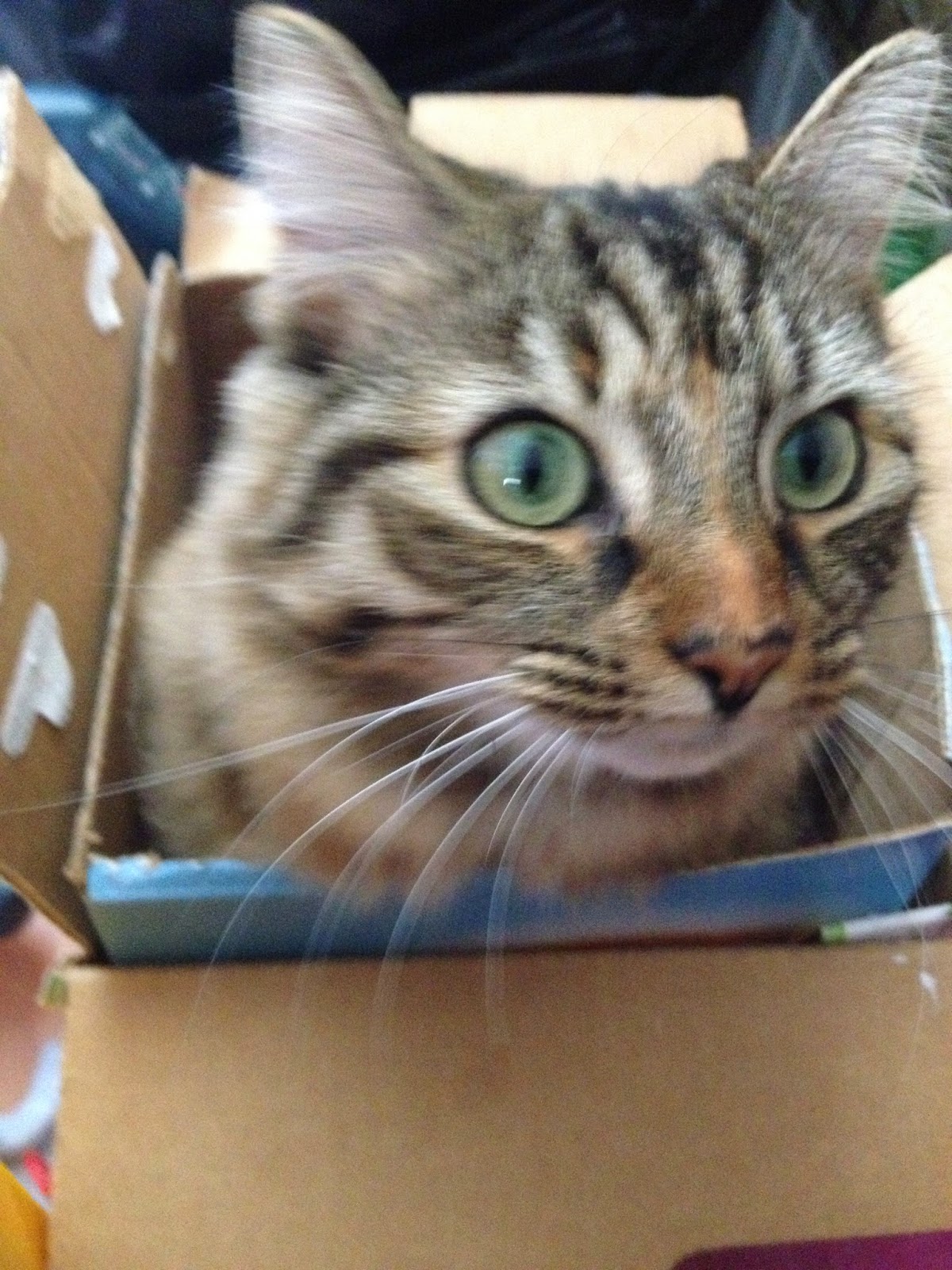 Round and round the mulberry bush, the monkey chased the weasel, the monkey thought 'twas all in good fun...Pop! It's me. Mwa ha ha!

One of my favourite things in life are boxes. They provide cover, can be sat in, on, or under, and they can afford many opportunities to surprise the humans.  Now I love sitting in boxes, preferably with the lid(s) closed.  I'm a fairly dainty cat, I have to be; my long, thick, gorgeous fur adds five pounds to my overall appearance. Being quite small though has it's advantages.  I have become quite adept at hiding so completely within a box that the humans have had to search for me because they thought I had escaped.  I have honed my techniques so that completely hidden within a box, I can wait for an unsuspecting human to pass by, then turn around to face the sound of their footfalls.  This makes the box shift ever so slightly, which in turn catches their attention, and peaks their curiosity enough for them to come over to take a closer look.

Now the game can proceed in one of three ways, depending on who is passing by.  If it is a mini-human, I bide my time until I hear them lean close enough to try to look through the crack in the lid of the box.  They don't know I am in there, so they are already unsure and nervous.  I wait until I can see their little furrowed brows, and can feel their warm breath brush in through the slit in the lid as they call my name. "Bonesie?" Then the air is filled with miniature screams of terror as I spring from the box and make a b-line for the back room where I can pretend I was eating the whole time.  The next few minutes are filled with sniffing and whimpery voices of the mini-human communicating half-effectively with the lumbering human.  I can only assume they are praising my grace upon jumping out of the box, and they are sad that they could never amount to as much.

Now if it is a large human that happens to pass by, I simply wait. I know their routine, you see.  They will sit on the couch beside my box, sometimes for longer periods of time.  This usually occurs after the mini-humans have been subdued for the night.  The larger humans will inevitably get up to get themselves a drink.  This is the perfect opportunity to flee from the box.  Right when the human has settled in with a fresh cup of something.  Jumping out at them then can sometimes result in a spilled drink and wet body-coverings.  The only downside to this is that it does annoy the humans.  Don't get me wrong, I'm fine with that, it's hilarious, however, the chances of me getting a midnight snack after that are about the same as the chances of a squirrel actually remembering where he stored his nuts.

Now if it happens to be Tribble, my partner in crime, another fabulous feline, then the games really begin.  This is the best because there is no big bang followed by a nap or more boredom.  If Tribble happens upon me in the box, then repeated minutes of game play ensue.  I might pop my head out of the box just enough to make the lid flap, at which point he'll swat it with a white mitten.  I sometimes sneak out a paw and catch him unawares.  He jumps back, and I know I have won!  But he always comes back.  This is why cats are preferable to humans, we are so laid back, that we take everything in stride.  Almost everything.  Everything except forgetting to feed us.  So for now, I'll bide my time in this old shoebox that the humans have taped and re-taped to allow for my continued happiness.  I suppose they're not totally useless after all.  Perhaps I'll flick the end of my tail briskly outside the box to catch someone's attention.  Until then...feed me.
Posted by Unknown at 18:30